Nestled between the mundane, grey buildings that make up most of Seoul sits Seodaemun Prison. It’s a solemn, yet striking scene. These well-maintained grounds are a stark contrast to the modern apartment buildings surrounding it, and an emotionally charged place that highlights an important part of Korea’s past. With no previous knowledge of Korea’s history, I arrive at Seodaemun Prison on a beautiful fall day. The sun is shining, the air is crisp, and I am curious.

This travel guide is part of our series on South Korea Travel and East Asia Travel. It was originally created on February 25, 2015. It has been maintained and updated (as of December 28, 2018) to reflect current viewpoints and travel trends.

A Glimpse into Seoul’s Dark History 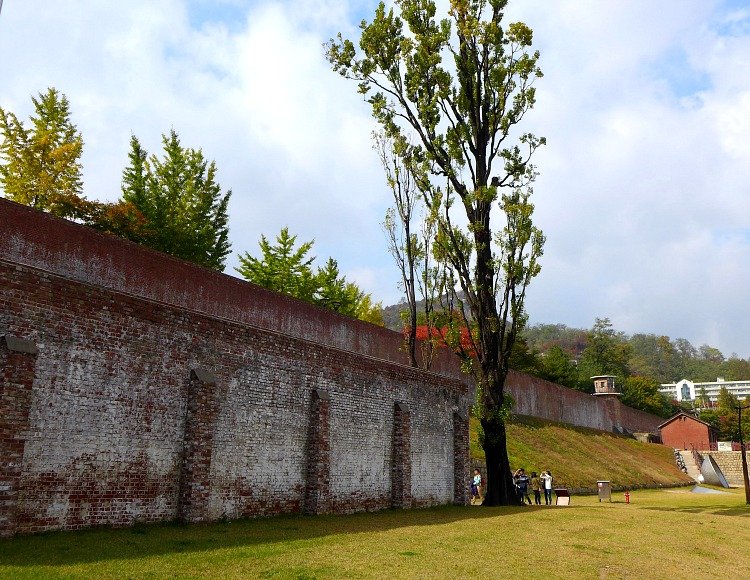 I step through the massive front gates, and emerge into a courtyard. “Wow, its beautiful!” is the first thought that pops into my head, and guilt immediately sets in. Describing a prison as beautiful seems hypocritical, but really, it is. Paths connect well-kept brick buildings to bright green and perfectly manicured lawns; trees and flowers cluster together at one end of the grounds; Ingwansan Mountain, in its colorful autumn beauty, stands guard above.

I follow the arrows on the ground directing me to the first building; the exhibition hall. Here, all the positive vibes I’m feeling quickly disappear as I learn the horror and brutality that took place at this prison. 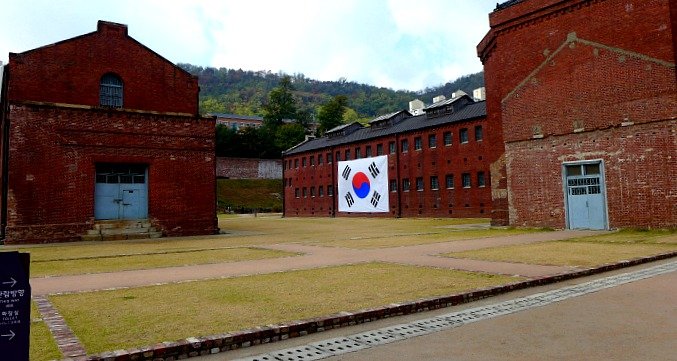 Not too long ago, from 1910-1945, Korea was a forced part of the Japanese Empire. During this time Koreans were forced to work, change their names and speak Japanese in effort to totally eliminate Korean culture. Koreans did not just sit back and let the Japanese wipe away their heritage, instead they actively launched independence movements around the country to gain back what was rightfully theirs.

Koreans who resisted the Japanese government were sent to Seodaemun Prison, and in an attempt to suppress the Independence Movement; the Japanese used these grounds to enact ruthless torture on Korean Patriots. 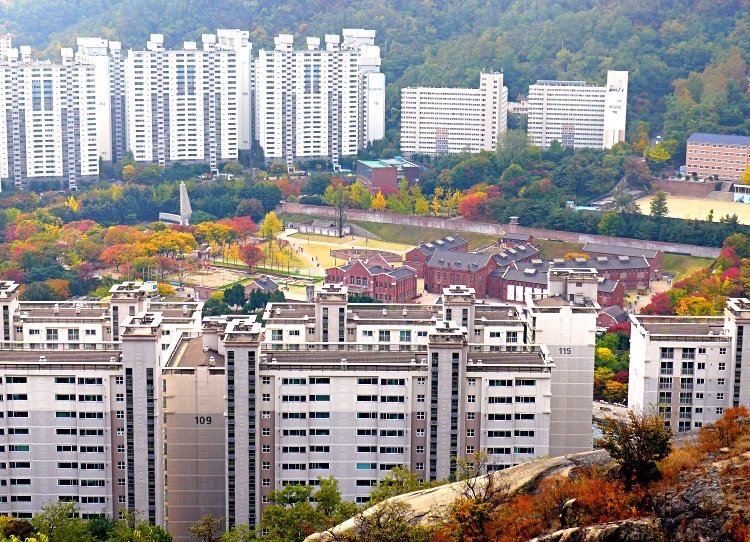 Inside the Prison Walls

With my newfound knowledge of the brutality that occurred in this prison, I make my way through the three restored buildings. The halls are quiet; no words needed to convey the sadness that once filled this place. Very realistic mannequins guard the two floors of tiny jail cells from the catwalk above. Chills run up my spine, and I find myself constantly looking over my shoulder to make sure they aren’t, in fact, real.

Designed to hold just 500 prisoners, Seodaemun was home to almost 3000 at its peak. I step into one of the cells and am floored by how small it really is; barely enough room for myself, let alone multiple inmates. The cells, totally exposed to the outside elements, have no heating or cooling system, and all contain just a bucket for a toilet. On this crisp fall day, the air inside the brick building is chilly; I cannot imagine surviving the frigid Korean winter in this place. 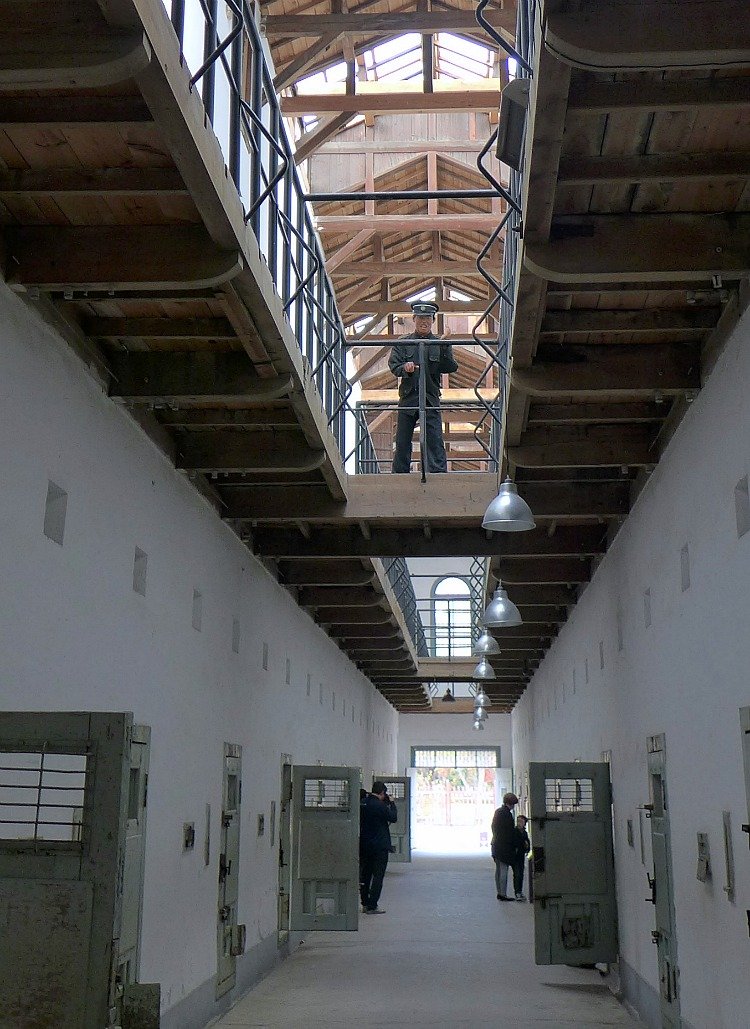 In the basement of the main prison building sits the torture chamber, and site of interrogations, isolated cells and extreme acts of violence. Fingernail torture, peeling off skin, rupturing of internal organs, cutting off extremities, and water torture are just a few ways the Japanese tortured Koreans. The exhibits have frighteningly realistic models of Japanese guards inflicting unthinkable acts of violence on the inmates. Like the guards in the jail cells above, these models are so realistic; I have to work up the courage to look inside the cells.

The displays, photos and interactive experience of it all is unsettling. A feeling of dread encompasses me and I must get out. I emerge into the sunlight from the depths of the underground torture chambers. Quite shaken by the brutality that occurred in this very place, I continue my exploration of the prison grounds, and head toward the execution hall.

The execution hall is where I feel the most emotion today. The place where so many Koreans headed to their death emanates sorrow. Two poplar trees straddle the wall that encloses the execution hall. The poplar tree on the outside is tall and strong, the one on the inside is small and frail. Stories say that prisoners being sent to their deaths grabbed these trees and wailed with deep sadness for their inability to secure independence, and the tree on the inside is stunted because of the terrible things that took place inside the walls. I believe it. The black and skinny poplar tree, and the eeriness of it all convey so much tragedy.

Visiting this prison opens my eyes to the history of the Korean people, and helps explain some of the anti-Japanese attitudes I so often hear. It is an emotional experience discovering this harrowing side of Seoul. The fact that Seodaemun Prison, filled with dark history, sits among the modern buildings that make up the Seoul of today is just a powerful reminder of the background of Korea and the strength of its people.

Send a guest post idea to us! I’d love to read and talk more about it with you!

Katie McGrain was an elementary school teacher who packed up her classroom and her life in Vermont to venture around the world. Constantly searching for a tasty morsel or a mountain to climb she is currently based in South Korea. You can find Katie's adventure stories, food discoveries and travel tales at <a href="aroundtheworldinktdays.com">Around the World in KT Days</a>